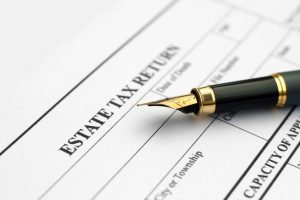 As the White House continues to discuss plans for major tax reform, attention has shifted back towards a controversial topic, repealing the estate tax. While this debate isn’t new to Congress, it’s found its way on the front burner, with President Trump’s backing.

The estate tax, often times referred to as the “death tax”, is a tax on assets before the distribution to heirs. The federal tax on gifts and estates is currently 40 percent on assets exceeding $5.49 million per person (about $11 million for married couples), targeting the wealthy and individuals with larger inheritances.

There are currently 14 states and the District of Columbia with estate taxes. A major claim from those opposed to the estate tax is the harmful results for small businesses and farms. Many believe the estate tax forces heirs to sell land or assets in order to pay the tax.

The future of the estate tax is unclear; however, some tax professionals propose a possible solution to simply lower the rate. Forty percent is significant, especially when these taxed resources are currently subject to an income tax. There is an additional tax if the estate has tax due in one of the 14 states or D.C.

There are a few other options to consider. One is to eliminate it altogether and give the beneficiaries carryover basis without a step-up. The other option would be to deem all assets sold on the decedent’s final tax return, triggering a capital gain. The issue with either scenario would be if some type of exemption would be available to limit tax exposure to the lower and middle class citizens.

At this time, repealing the estate tax would provide relief to a very small percentage of wealthy individuals. The estate tax is not a significant revenue generator for the government due to the marginal group of individuals who qualify. Funds from the estate tax are estimated to reach less than 1 percent of the U.S. population, triggering critics to argue the expense of collecting the tax outweighs the funds received.

The debate of the existence of the estate tax has been ongoing, with dramatic increases since 2001, and if history repeats itself, it will continue on for high net worth individuals and couples.